An Evening with Jonny Lang and Buddy Guy

The lights went down right on time. 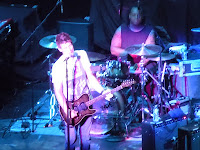 Starting strong with a little blues number called "Don't Stop (For Anything)" Jonny Lang literally pulled every note kicking and screaming from his guitar. The sound was crisp, the pickin' fast and furious.

While the more blues oriented portion of his set was really strong, I felt some of his more rock edged songs lacked the same depth. At one point his singing mimics each note as he plays, a lot of effort for not a big reward. Vocally, at times it seems he tries a little too hard. He does have a decent range, though not sure he uses it to his advantage. Simple rule...don't overthink the performance, let the guitar playing speak for itself.

"Redlight" was one of the high points of his set, as was a great cover of Stevie Wonder's "Living for the City."  Backup singer, I believe her name was Missy Hale, did one hell of a job trading off lead vocals with Jonny on that tune. 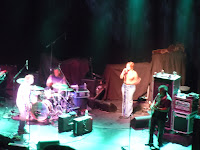 The moment of the night however was the last song, no surprise that it would be "Lie to Me." . What was a surprise was how it began. The band left the stage and Jonny stood there and sang the first two verses of the song alone with an acoustic guitar. While not nearly as monumental as Clapton doing "Layla" acoustically, it was a fascinating take on the song. Midway through, he switched to electric, brought in the band...and brought down the house. 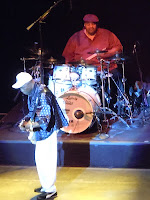 
The only way to know Buddy Guy has been around for so many years is the talent and stage presence. You sure can't tell his age by watching him. As he strolled onstage wearing his ever-present baseball cap, it was evident by his gait this was a man who still found pleasure in taking his spot behind the microphone. Buddy Guy is quite a character. A living legend, he has garnered enough points over the years to tell the to audience "shut up" as they applaud him, so he can tell a little anecdote about another musician. Buddy Guy, so respected, spends a lot of time complimenting other musicians.

He said a few times during the show that he doesn't rehearse.  He knows what he has to do...he just expects the band to keep up with him...and they did.

Starting out with "Nobody Understands Me Like My Guitar," Buddy showed what the old guitar masters have learned. You don't always need to make your guitar scream...sometimes it's best to let it weep.


"We're gonna do something so funky...you can smell it."

The blues standard "While You Were Steppin' Out (Someone Else Was Steppin' In),"  had everyone singing along. Just great stuff.. Buddy sang a song called "I'm 74 Years Young" ...his story of the blues. He ends the song saying "I wrote that song 2 years ago." Yes, 76 years young and the man had a smile on his face throughout the entire set. At one point Buddy left the stage still playing, and worked his way through the crowd. He walked through the lower level seating and ended up in the balcony, not missing a beat. 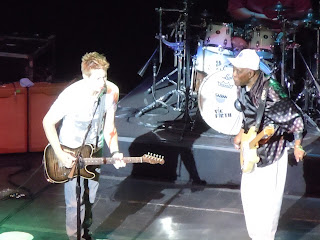 When you have two great guitarists on the same bill, there is an expectation they will jam. This night had both Buddy and Jonny together...and a young guitarist whose name you will want to remember. A great rendition of Junior Wells "Little by Little," gave way to the entrance of a 13 year old boy by the name of Quinn Sullivan.

According to Buddy, he first heard Quinn play at the age of 7. Well, Mr. Buddy Guy knows the blues and this kid is the real deal. Technically, he was the best guitarist on stage that night. To say the entire crowd was blown away by Quinn Sullivan is an understatement. He didn't sing at all Saturday night, and watching a few of his videos, I can't wait until he grows into his voice. Sharing the stage with two guitar greats, he had the attitude any lead guitarist should have...been there, done that, now just shut up and listen. Yeah, he's that good. 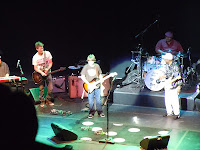 Here's a clip from a recent show where he opened for Buddy...Quinn Sullivan.
Remember the name.

My profile says "I've always been a rocker, but you can't beat the blues."...well, this was one great night of blues.