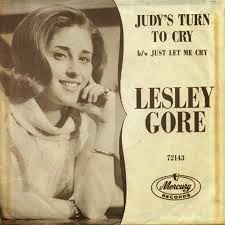 As a girl of not even ten, I remember listening to Lesley Gore and thinking there was something about her attitude that made her different than most of the other girl singers from that time. Though I was years away from heartbreak, even the puppy love kind, I could relate to the hurt she sang about in "It's My Party."

But what I really enjoyed was the sequel where she got back her guy," Judy's Turn To Cry." While I seem to recall thinking that I wasn't sure if I would take the jerk back, the song did have a great "kiss my ass" attitude that was kinda cool.

Then she came out with "You Don't Own Me."

That was a game changer for me. I wasn't like most of the other girls I knew, especially cousins and those within the family circle. I didn't play with dolls, I wasn't dreaming of the six kids I wanted to have. I didn't know a lot about myself, but what I did know was that no one would be telling me how to live my life. Were there repercussions from that attitude... yeah, many. But I did find my truth, probably most closely related to another song, this one from the 70s and The Animals.

My lifetime of fierce independence began with a singer-songwriter from Tenafly NJ. Lesley Gore died yesterday, leaving us way to soon. Her career not only included her singing and writing, but also acting and activism.

Though not as well known as so many of her songs, this was my favorite.

Easy Journey Lesley. I hope her party is still going on.

The Grammys: The Main Event 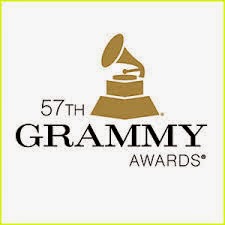 And it started out with such promise. AC/DC blowing out the hall, devil's horns, and even Blake Shelton singing along to "Highway To Hell."  And truth be told, it wasn't that bad.

A few quick thought on the evening.

Tom Jones. Still has the pipes. While Jessie J was a little over the top, their duet on "You've Lost That Lovin' Feeling" was very strong and a pleasant surprise.

Miranda. Yes you are still winning awards, but it's getting real close to the time when you should be rethinking the Daisy Dukes image.

Kanye. Meh. Nothing. Not good, not bad, kinda boring. And really, stop thinking you have any right to judge who should win an award. Just stop.

Madonna. It may be time to reinvent yourself again. This persona is looking a little...sad.

Hozier and Annie Lennox. Dynamic. Annie just said "bitches, this is how it's done."

Would it have killed them to have just a little more Stevie Wonder?

Brandy Clark. Poise and talent. And who is cooler than Dwight Yoakam?

Sam Smith and Mary J Blige. Well worth the wait, but wouldn't a mashup with Tom Petty singing "I Won't Back Down," have been really fun?

So is orange the new purple?

The Android commercial was worthy of an award.

Just an idea, but wouldn't it be nice for the Grammy's to take one or two winners from the early show and showcase them on the late show? Let the possible winners in a previously decided category...say the Best Roots Album, or Bluegrass, rehearse once or twice beforehand and let the winner do a song at the main event. Instead of hiding so many talented musicians and music genres under the cover of a streaming only event? Just a thought.

Another year done. Time to make some new music.

For my post on the Premier show which was held earlier in the day, click here: The Premiere Show

The Grammy Awards: The Premiere Show

Cut me a little slack if my Grammy rant has a few incoherent moments. I've been really sick for the past 4+ days and hadn't really even looked at my computer during most of that time. But watching the red carpet of the Premiere show of the Grammy, better known as the early telecast, well there was a moment I just felt the need to discuss. 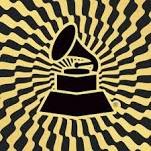 As the way too perky British woman interviewer was introduced to the two creators of Best Children's Album nominee Appetite for Construction, a third person, a woman, was added to the group. After the two men answered a question or two, the woman was allowed to introduce herself. She very proudly announced she had been privileged to be the voice in the recorded version of I Am Malala. Wow. As someone who does interviews, my ears perked up and ten questions ran through my mind. Did you meet her? How do you set your tone for your work? What about her words touched you the most? On and on.

Once the daytime awards began things were better. If you never seen the early awards, it's just awards and a few musical performances. No commercials, no stupid banter between presenters, no over the top music extravaganza. It's a lot of awards given quickly.

After seeing Mike Farris play in NYC a few months ago, I knew he deserved to win a Grammy, Well, he did. Shine For All The People took home the award for Best Roots Gospel Album, well deserved for his music, even more appreciated for his road getting there.

It was bittersweet seeing Edgar Winter pick up the Best Blues Album award for his brother Johnny's Step Back. Johnny Winter was one of those guys you never expected to live as long as he did, but were still shocked when you heard he had died.

Nice for Rosanne Cash to have her Bonnie Raitt moment and win three Grammys about a hundred years since her last one. And damn, if you haven't seen the Old Crow Medicine Show live, just do it.

It's almost time for the main event to begin. Last year I was in the building, this year I'm in my pajamas. My feet hurt a lot less this year, but it's not quite as exciting.