Another One Hit Wonder: Something About a Bridge and Billie Joe


In 1967 when today's one-hit wonder came out I was...well, alive. It was the time of some really great music and some not so great. When this song came out, I absolutely hated it.  But it was everywhere, just like a Katy Perry song today. There was no escape.

Over the years, my hatred lessened to the point where I can appreciate the songwriting and the story. In fact, the song is extremely well crafted... and it has a hook for the ages. I'll get to that later.

Now in the 60's there were several musical hits which dealt with teenagers dying too young. Mostly they involved car wrecks and train wrecks. But there was one which was written about a suicide.

"It was the third of June, another sleepy, dusty delta day" 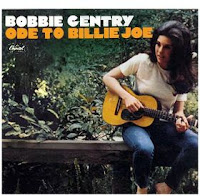 The song written and performed by  native Bobbie Gentry was released in July 1967, hit #1 on Billboard's Hot 100, won a total of four Grammy's, was listed as one of the top 500 songs of all time by Rolling Stone and was turned into a movie. A simple arrangement of her guitar with some strings in the background, her voice and...the story.

The story of the song centers on one Billy Joe McAllister and his death when he "jumped off the ." It is told in first-person narrative, with the storyteller revealing details about his death, as the monotony of everyday life plays out.

"  It was the third of June, another sleepy, dusty delta day
I was out choppin' cotton and my brother was balin' hay
And at dinner time we stopped and walked back to the house to eat
And Mama hollered out the back door "y'all remember to wipe your feet"
And then she said "I got some news this mornin' from Choctaw Ridge"
"Today Billy Joe MacAllister jumped off the "  "

" 'n' Brother said he recollected when he and Tom and Billie Joe
Put a frog down my back at the Carroll County picture show
And wasn't I talkin' to him after church last Sunday night?
"I'll have another piece-a apple pie, you know it don't seem right"
"I saw him at the sawmill yesterday on Choctaw Ridge"
"And now ya tell me Billie Joe's jumped off the Tallahatchie Bridge"

Now we've learned there is a family connection.


" 'n' Mama said to me "Child, what's happened to your appetite?"
"I've been cookin' all morning and you haven't touched a single bite"
"That nice young preacher, Brother Taylor, dropped by today"
"Said he'd be pleased to have dinner on Sunday, oh, by the way"
"He said he saw a girl that looked a lot like you up on Choctaw Ridge"
"And she and Billy Joe was throwing somethin' off the Tallahatchie Bridge" "

Now there's the hook. It seems the narrator is the one with the relationship with Billy Joe, clandestine at that. And what were they throwing "off the Tallahatchie Bridge" ?  Now, when this song came out, that was the question. While not quite as big a mystery as who Carly Simon's "You're So Vain" is written about, the music world was wild with speculation. Love letters, a ring, flowers...but the question was never definitively answered.


" A year has come 'n' gone since we heard the news 'bout Billy Joe
'n' Brother married Becky Thompson, they bought a store in Tupelo
There was a virus going 'round, Papa caught it and he died last Spring
And now Mama doesn't seem to wanna do much of anything
And me, I spend a lot of time pickin' flowers up on Choctaw Ridge
And drop them into the muddy water off the Tallahatchie Bridge "

As the story ends, we see that life goes on, not always happily...even for the bridge. It collapsed in 1972.

Take a listen and read the story...