Bob Welch: A Tribute From A Sentimental Lady

Maybe I don't remember or maybe it's just age catching up, but I don't recall a year with so many musical artists deaths.  Now we have another one...Bob Welch. 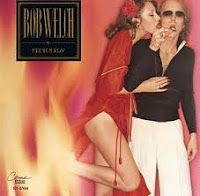 Reports indicate Bob Welch died yesterday at his home in Nashville of a self inflicted gunshot wound.

An early member of Fleetwood Mac, Bob Welch played a big part in the music style of the band moving from  a edgy blues band to a more melodic group, where it has enjoyed such monumental success. His resignation from the band brought about the next major change in the Fleetwood Mac line-up, as Stevie Nicks and Lindsey Buckingham joined the group.

A guitarist and writer, Bob Welch also had a voice. And once you heard it, you would never forget it. The first time I heard "Sentimental Lady," the blend of vocal, lyric and melody was so beautiful, it could just about lift you off the ground. And once you heard the opening rift of "Ebony Eyes" you were hooked on the song for life.

Rather than taste the studio versions, let's have a live taste of three of Bob Welch's best and one more, not quite as well known song.