Arlo Guthrie @ Newton Theatre: A Night of Songs and Stories 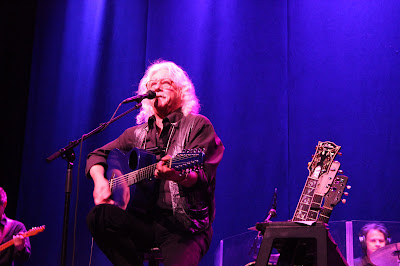 For a November night in northwest New Jersey, the weather could not have been better. A light jacket was enough to keep you warm, but not crowd you in your seat. Tonight you wanted to be comfortable for it was to be a night of songs and stories. Arlo Guthrie was in town, and we weren’t the only ones celebrating. With this year marking the 100th birthday of Arlo’s father, legendary folk singer and documenter of mid-century America, Woody Guthrie, Arlo was performing many of his dad’s compositions.

The Newton Theatre is a reclaimed from the edge of destruction movie theatre. Small and intimate, you get to share the experience with 604 new friends. Though we were lucky to be sitting up front, it’s hard to imagine a bad seat in the house.

With no opening act, Arlo and his three-piece band took their places onstage. With each member dressed in black, there would be no distraction; this night was about the music and the stories that inspired it. Arlo sat center stage next to his guitar rack with four beauties waiting to be picked.
Arlo began the evening speaking of Woody, and the joy he felt being able to spend nights such as this, singing the songs of his father, the songs of an America past, the songs of justice and injustice, the songs of his family. His voice is filled with more gravel than before, as if age and life’s journey has settled in. But every once in a while, the familiar sound of the Arlo from another time, punctuates a sentence of a story, and all those memories when you heard him say “Officer Obie” or “you remember Alice,” come flooding back. And you smile.

Arlo Guthrie is a superb storyteller. Pulling a beautiful acoustic Gibson out of the rack, Arlo began telling the story of Woody’s “Oklahoma Hills,” and you realize just how different the world was back then for a songwriter. You might not even know your song had been recorded until you heard it playing in a jukebox.

One of the wonderful attributes of the writing of Woody Guthrie was his ability to put down words explaining injustice, hard times, or the beauty of this country, in the most simple of words. Their simplicity making them universally relatable.

Growing up Guthrie meant you had the most interesting of extended families. Ramblin’ Jack Elliot, Huddie “Leadbelly” Ledbetter, Cisco Houston to name a few, were household regulars. Their songs and their stories were exquisite as told by this grown man who had known these legends when he was a child.

Though storytelling and song is his forte, Arlo Guthrie can play a real pretty guitar, though this night he battled with keeping them in tune. As a little tweaking of the strings went on longer than expected, Arlo blamed it on the blue light overhead. The audience laughed as the lighting guy quickly changed the color. It didn’t help, but it did make the evening even more real; this was no rock star with a technician handing him a perfectly tuned guitar for every song. This was just a musician sitting in someone’s living room trying to play his best for some new friends.

Listening to the songs of Woody Guthrie is like riding on one of the filled-with-family-and-belongings trucks Steinbeck wrote about in The Grapes of Wrath. In fact Guthrie wrote a song condensing the 600 pages of Wrath into a song with twelve verses. This was something over which Steinbeck took umbrage. The combination of the songs and the perspective Arlo brings to them is a history lesson so interesting, you wish this was how it was taught in school. After an hour of enjoying the songs and tales of times long ago, Arlo and the band took a short break. 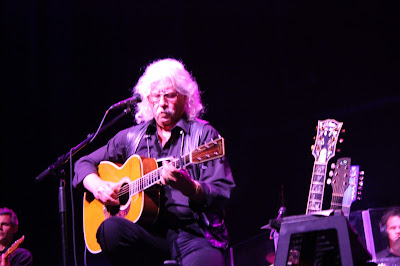 Coming back onstage the music catalog shifted to Arlo’s own. Now it wasn’t only Woody’s songs which were prefaced by a story. “Coming Into Los Angeles” began with a story of his late wife Jackie’s arrest for marijuana at the airport, after a long-forgotten gift from a fan to Arlo, was found in her bag.

He then talked about his early memories of Leadbelly in his home, and his search for Leadbelly’s grave somewhere in Louisiana. Leadbelly, who wrote among many others, “Midnight Special” and “Goodnight Irene,” was buried in Shreeveport, and they found the grave with guitar picks scattered over the tombstone. So he pulled out his guitar, sat there, and played some songs for the man he remembered as a two-year old. One of those songs “Alabama Bound,” was Arlo’s next selection.
One highlight of the evening was Steve Goodman’s “City Of New Orleans.” Lyrically, you can’t write much more of a poignant ballad. It is a testament to his songwriting that a song so moving, is about a train. The story of how Arlo and Steve met is priceless, making his loss at such a young age, even more lamentable.

Relating how he first laid eyes on his future wife and singing “Highway In The Wind,” which he wrote for her, must be more than a little bittersweet, a little over a year since the death of the woman to whom he was married for forty-three years.

Getting close to the end of the show, Arlo pulled out arguably Woody’s most recognizable song, “This Land Is Your Land.” As we approach the Thanksgiving holiday, the imagery of the words was not lost on the audience. Considering there is not another song which embodies the greatness of this country more than this, it is a song that should be taught in every school in this country.

Of course since we are so close to Thanksgiving, you can be sure there wasn’t a person in the crowd who wasn’t hoping to hear the familiar first few notes of “Alice’s Restaurant.” Arlo did not disappoint.  As he began to play, the audience sang along to the beginning chorus. At this point Arlo said “You don’t think I’m really going to sing this whole freakin’ song do you?” And no, I don’t think we really did. And just that one chorus, while a tease, was enough of a taste to keep a smile on everyone’s face. He picked the melody while talking about what the song has meant to him and his family over the years… the good and the not so good.

As all of our storytellers get older, the danger of losing important parts of our past, grows. Arlo Guthrie not only lived some of the stories first-hand, he grew up surrounded by legends with their own stories to tell. Never miss a chance to hear them because you’ll never forget them once you do. And that keeps them alive.


This evening with Arlo Guthrie pickin’, singin’ and tellin’ stories was one of the most enjoyable nights I’ve ever spent in a music hall. It was an honor to hear him speak of his father, and all those who came before.  And hopefully by writing about it, the stories keep going just a little longer.